Question of the day: Who are the Celts and why do I love their jewelry so much? 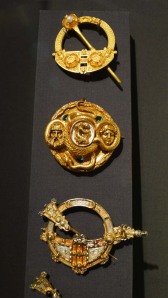 According to archaeologists, if your ancestors were from  either Turkey, the Balkans, Germany, Poland, Hungary, Switzerland, the Ukraine, Northern Italy, France, Spain, the U.K and of course, Ireland, then you are definitely a Celt, okay,  probably a Celt. If you don’t believe me, you can always send some of your DNA to one of those labs along with a few thousand dollars, and find out.  Short of that, here’s what excavations prove. The first inhabitants of the Emerald Isle were fearsome Lads who looked something like this:

They were joined by scattered human inhabitants who probably came over from Scotland. Much, much later, a faction of Celts (also called Gauls) immigrated from Europe to the island  between 500 BC and 150 BC, just ahead of the Roman Empire.  The Celts overwhelmed the locals with their language and their  great artistic flair. I imagine the Celts who stayed behind in Europe regretted it.  Julius Caesar made his reputation fighting the Gallic (that’s Celtic to you) Wars from 58-51 BC.

There were a lot of rumors about the Gauls/Celts circulating in Greek and Roman writings: the Celts were led by women warriors (at least some of the time). Easy to believe as the Irish have had two women Presidents. The Celts/Gauls fought naked (don’t see any clothes on that Dying Gaul).  And most controversal, the Celts/Gauls were headhunters. After a fighter decapitated his enemy, he preserved the head in cedar oil, then handed it down from one generation to the next for the benefit of bragging rights.

The Celts/Gauls who lived in England and parts East had their language infiltrated by Latin and were converted to Christianity as it spread throughout the Roman empire.  The Celts who lived in Ireland remained insulated for a longer time, keeping their language and their funny Druid religion that sometimes turns up in Monty Python movies.

Until… St. Patrick sailed over from England in 500 AD and converted the island with one hand, while driving out the snakes with the other. For the next 300 to 400 years (until the Viking invasions) a lot of Irish Monks had the leisure time to illustrate the Gospels and Bibles with interlaced German animal designs, Greek key patterns, Roman vegetal art and Coptic dot patterns, all blended together to create the grand Celtic style.

You can see that style in the 8th century Book of Kells (8 Euros in the Long Library at Trinity College, Dublin -no photos allowed) or you can see it in the High Crosses of the 9th-12th centuries throughout the Irish countryside (if you know how to drive on the left).

You can see also how that style evolved into a Neo-Celtic craze that has taken Dublin by storm for the last 200 years. 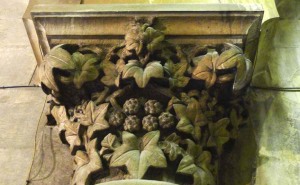