Ostentatious sex parties with underage babes might sound like Silvio Berlusconi’s adventures at Villa Certosa in Sardinia, but it’s actually Rome in 151 A.D. The brothers Sextus Quintilius Maximus and Sextus Quintilius Condianus were two wealthy Roman merchant traders and government Consuls who relished their reputation for throwing dazzling parties in refined taste (unlike Berlusconi). The brothers built their luxury Villa 5 miles out of downtown Rome on the Appian Way (no coincidence that it was a great trade route into the city). Meticulously designed, the Villa exhibited an abundance of what every noble Roman could desire: inlaid marble floors, hand cut mosaic tiles, hot and cold baths, frescoes, and gardens. It was especially envied for the dozens of exceptionally fine sculptures of Gods and Goddesses. More on that later…

Never, ever, brag that your house is bigger than the Emperor’s. Insecure and incompetent, Emperor Commodus  adored the Villa so much that instead of simply hiring the brother’s architect or interior designer, he confiscated the Villa and executed the brothers in 182 A.D. Then he did what all new owners do, he enlarged it. The orgies grew more vulgar, his rule grew more inept and after an unsuccessful attempt at poisoning him, his enemies simply hired a hit man to strangle him in his bed. Those who live by the sword, etc. Emperor after Emperor improvidently added on to Villa Quintilii: a hippodrome here, an aqueduct there, until frankly, no one could afford the upkeep. In only a few centuries, this vital symbol of power and aestheticism went the way of the Roman Empire: declining in use, then looted, then left to the enjoyment of cows and sheep. 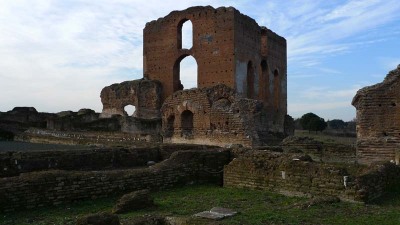 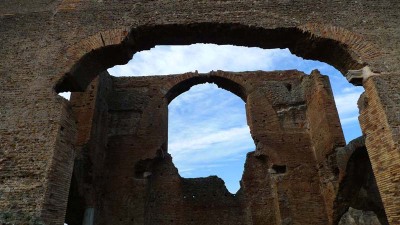 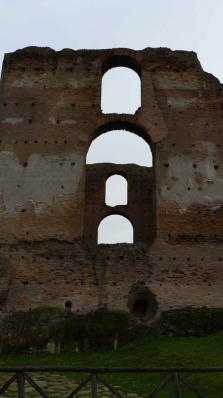 In about 1775 the Scottish artist Gavin Hamilton realized he could make more money as an antiquities dealer than he could as a neoclassical painter, and if you saw his paintings, you’d know why. He started excavations at the Villa and sold some of the best pieces to the British aristocracy back home while giving other pieces to the Pope in lieu of hush money. In 1797, the Torlonia Family of wealthy bankers owned the Villa and from about 1825 onwards they dug around in the backyard and found their own extraordinary specimens of Roman statuary.
In 1985, the Torlonia heirs sold the Villa ruins (now devoid of any statuary) to the City of Rome. It has been left to the dear Director of the Works of Ancient Rome, Piero Meogrossi, and his team to restore the Villa and countryside to something resembling what the brothers had in mind 1900 years ago. It is well worth your time to wander  over the picturesque ruins of a place that once threw parties more lascivious than those at the Playboy Mansion. Besides that, it is a lovely respite from the traffic, noise and crowds of Rome’s historic center and the perfect place for a picnic.


PICNIC PICKINGS: besides truly great Pecorino cheeses you’ll never taste in the U.S.,  an extraordinary selection of Italian pig and wild boar meat hangs inside our favorite take away shop, ANTICA NORCIANERIA at Via della Scrofa 100, Rome, 00186.  06 688 01074. Right in the historic center, not far from Piazza Navona, it’s best to go there in the morning hours before your field trip. Our other favorite for the absolute best take away Italian food is FRANCHI at Via Cola di Rienzo 204, Rome, 00192. 06 687 4651. They are open 8am-9pm Mon.-Sat. They are bigger, with more reliable hours and a wider selection of food, but they are a bit out of the way if you are staying in the center of Rome.

After your picnic, be sure to see the striking sculptures in the visitor’s center and museum part of the Villa. To appreciate the sculptural riches that once stood in every corner of Villa Quintilii you must plan a separate visit to the Museo Pio-Clementino in the Vatican Museums. One day, in the future, perhaps, the Torlonia family might even throw open their doors to what is said to be one of the finest private collections of Roman antiquity in all of Italy.

In the meantime, follow in the footsteps of Piranesi who sketched these ruins and the Arcadian countryside surrounding the Villa.  The most efficient way to get there is to take a city bus (about 35 minutes) to Villa dei Quintilii, 1092 Via Appia Nuova. Alternatively,  you could join a tour that gives you the freedom to roam. To find your bus route and number, go to the Internet site: atac Rome. (The acronym is as aggressive as the bus drivers, themselves.) Input your address in Rome and your destination address.  Of course, if you are staying in a hotel, the Concierge is your new best friend, and he’ll do it all for you. It’s best to avoid the glories of the countryside on a scorching hot summer day unless you’ve got your own slaves to fan you.
photography by Waldemar Kalinowski