Today’s challenge: find the best “Trippa Alla Romana” (that’s Roman cow’s guts to you) to appease my Polish husband, Waldemar.  Our quest ended in a tiny neighborhood time capsule of a restaurant near Chiesa Nuova that may or may not have been an old haunt of Fellini’s.  For those of you who, like me, would rather take a pass on rubbery bovine stomach lining, or mushy calves’s brains, make the pilgrimage instead, to the best pizza joint in town,  Antico Forno Roscioli, Via dei Chiavari 34, 00186 Rome. 06 686 4045. (Not far from Campo De Fiori).

It’s an all-in-one bakery, pizza, and hot lunch food counter (closed by 5pm). With barely room for a few tables and stools, it’s mostly a standing room event. There’s a convivial, if somewhat embarrassing atmosphere of strangers staunching the flow of pizza oil dripping down their sleeves. There’s always a huge hunk of porchetta, and a selection of freshly made pastas and lasagne’s that are greedily consumed by the hordes before about 2pm. This is a companion to the more formal Restaurant Roscioli situated around the corner and mentioned in my previous Trajan Market blog.
After eating a cubic foot of pizza we made an urgent sortie to the famous Roman coffee house, Cafe Sant’Eustachio, Piazza di Sant’Eustachio, 82, 00186 Rome. 06 6880 2048 (next to Pantheon) Even after our espressos, we still felt that dull-around-the-edges carb induced lethargy, so we took a leisurely stroll towards the Vatican Basilica.
“To the Cupola”. The racket is this, for 5 euros you get to walk 320 steps up into the Michelangelo designed dome, or for 2 more euros each, you can take the elevator up. We took the elevator. 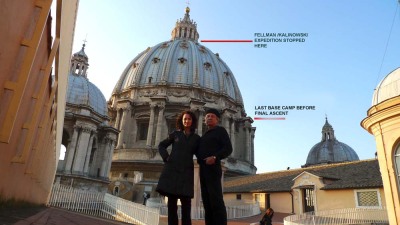 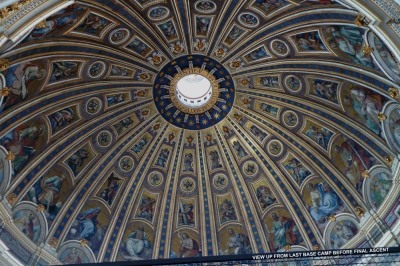 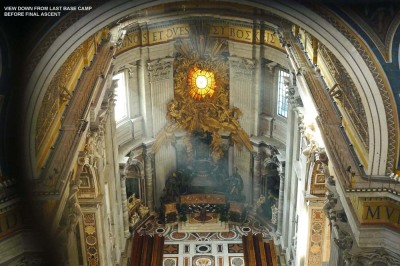 When the elevator spits you out, you wind your way up several more unadvertised staircases into the vast echoing space of the 42.3 meter diameter dome (only a little smaller than the Pantheon). You are perched dizzyingly over the church nave, looking down at the termite sized people 120 meters below.
Once upon a time there was only a balustrade between us up here in the dome and the lower orders on the ground. There was more than a vague threat of someone toppling down in the middle of Mass and ruining every one’s day. Today there’s a 6′ high prison grade chicken wire fence erected around the equator of the dome that blights your photos from almost any angle. Note: since Michelangelo died in 1564,Giacomo della Porta and Domenico Fontana had to finish the construction, and a fine job they did – definitely more than 7 euros worth of view.

Dozens of photos later and more than a touch of vertigo, we decided it was time to call it a day, but what was that little sign pointing up instead of down? Like Alice in Wonderland, curious and rather dumb, we started climbing. The dark staircase grew more and more narrow, more and more winding.  The walls began to incline inwards precariously (it’s a dome, right?). Thrown off balance, we realized we were sandwiched between the inner shell we had just visited and the outer dome that’s seen from all over the city. Michelangelo modeled his design on Brunelleschi‘s Duomo in Firenze – see Ross King’s wonderful book, “Brunelleschi’s Dome” which describes this phenomenon. 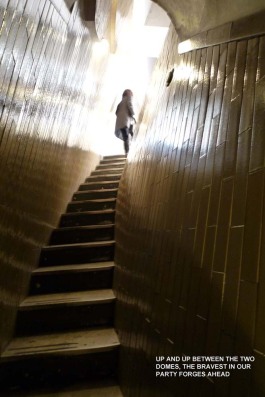 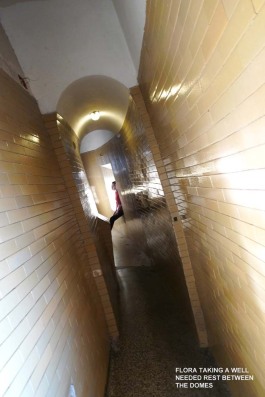 After traversing miles of passageway with very little oxygen, it seemed futile to call for paramedics as they would be gulping down espresso in Cafe Sant’Eustachio.  I peeled off as many layers of my clothing as the Vatican dress code allowed to relieve my cold sweat. Finally, we reached what had to be the end of the line, literally: a spiral ladder, with a wretched little rope instead of a hand rail.  Waldemar used his most gentle kindergarten teacher voice to cajole me up since there was no possibility of turning back   in the one-person wide narrow duct.
Reward yourself with dinner at Osteria der Belli, Piazza S. Apollonia 9/10/11 off of Piazza S. Maria in Trastevere, 00153 Roma  06 580 3782.  It’s best to make a reservation since it’s our friend, Maria de Giorgio Eller’s favorite restaurant; it has become an awful lot of people’s favorite restaurant in Trastevere.