It’s Epiphany in Rome and you know what that means: Romans and tourists alike stampede the retail stores for the annual slashed price shopping sales. The government sanctioned event is an attempt to quell the restless strike-prone inhabitants of Rome, and it usually works.


We decided to turn back the clock and explore the first shopping mall ever built, ancient Trajan’s Market (113 A.D.) Located on many levels of Quirinal Hill, the museum entrance is rather hidden at Via 4 Novembre #144 (+39 06 679 0048). It’s just off Via Fori Imperiali and walking distance from practically anywhere in the Historic Center of Rome.  Presumably, vendors sold cash and carry type products like olives, wheat, cheese, etc. The market is excavated and documented with great clarity and sensitivity, but is woefully short on building ornaments, mosaics and statues that would contribute to imagining the atmosphere experienced by early Roman shopaholics.  The adjoining Temple of Trajan, once a spectacular edifice, also exists more as a monumental plan or outline, missing most of its columns, walls, roof, and statues to the great Deities of Shopping.

So, question of the day: where did all the beautifully carved Roman capitals, sculptures of Hercules, Achilles, Caesar, etc., mosaics and ornaments go, for God’s sake?  I know it’s been about 1,500 years since the last gladiator cut out the heart of his defeated opponent in the Colosseum, but still… It’s no use simply blaming the British Museum or Napoleon when apparently, the problem started the minute the Roman Empire went out of business. Early medieval Christian sects, and just regular folks who wanted to live in a townhouse, moved into the Colosseum or built their dream houses atop the forums (fori) using the materials at hand. From the XVth century to the XVIIIth century, Popes used the Colosseum (read: worthless pagan real estate) as their private quarry. Also, the noble families of Rome could buy stones at bargain prices from the Papacy and build what would become the essential destinations on every contemporary tourist’s itinerary such as Palazzo Farnese, Palazzo Barberini, the Palazzi Senatoria dei Conservatori on Capitoline Hill among others.
The Popes didn’t stop at dismantling the Colosseum and the forums when they had the Pantheon just up the street. It’s well documented that Pope Urban VIII (born Maffeo Barberini, Pope1623-1644) stripped all the bronze from the portico ceiling of the Pantheon to manufacture canons to fortify Castel Sant’Angelo.  Experts have been arguing for years as to whether there was  enough left over to cast Bernini’s opulent baldacchino in St. Peter’s Basilica or was that just a vicious rumor? Urban VIII earned the famous Roman proverb: “What the barbarians did not do, the Barberini’s did”.
Back to our Mercati di Traiano. The Quirinal Hill is a spectacular site from which to view Rome, especially the dramatic weather changes. It is a pleasure to pick your way along the paths that climb up and down the many levels of this large structure which housed administrative offices of the government on the top floors and placed the vender’s stalls below, closer to street level. The only big difference between this ancient mall and our megamalls today  seems to be that there were no public bathrooms, or at least they are not indicated on the museum’s elaborate plan. That would have cramped any woman’s shopping style.
There is one other element I should mention. If you visit on a Sunday, the large boulevard in front of Trajan’s Temple and Market, the Via dei Fori Imperiali is closed to traffic so that pedestrians can have a lovely “passeggiata” (a promenade with swarms of Romans pushing strollers and tourists eating junk food). Since there are no “quality of life” laws, we could hear a Peruvian folk band blasting on an endless loop something that sounded like Paul Simon’s old song “If I could…I’d rather be snail, etc.” (which he presumably lifted from a Peruvian folk melody). So, this bizarre background muzak in Rome turned out to be just like the bizarre background muzak we find in a real mall in America today! Oh, and watch for the exhibition tango dancers!

If you are hungry after this, follow us to the refined tastes of  Roscioli Restaurant on Via dei Giubbonari 21, 00186 Rome. 39 06 687 5387.  They specialize in carefully curated prosciutto selections along with the finest Italian cheeses.  Their delicate pastas also contrast deliciously with some of the old fashioned Roman standards. Moderately expensive. 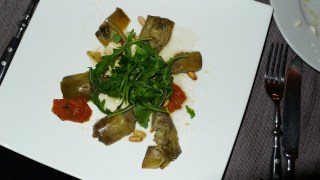